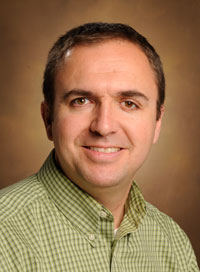 Dr. Blum is the director of the Bioexpression and Fermentation Facility (BFF).  Dr. Blum received his Bachelor of Science and Ph.D. degrees in Biochemistry and Molecular Biology from the University of Georgia.  His graduate research under the direction of Dr. Lars G. Ljungdahl, focused on biochemical and genetic characterization of enzymes involved in the degradation of plant cell walls.  After graduation, Dr. Blum joined Diversa Corporation where he continued his research on discovery and characterization of biomass degrading enzymes.  While at Diversa, he was responsible for the direction of several sponsored research programs including one project concept that was awarded Phase I and Phase II SBIR funding from the Department of Energy.  In addition, he was the original project manager leading research that resulted in the development of Diversa’s Luminase product line. After leaving Diversa, Dr. Blum joined Vanderbilt University Medical Center where his research focused on mammalian protein expression and antibody discovery.  His research at Vanderbilt utilized a novel technology that generates monoclonal antibodies from human peripheral blood.  Dr. Blum has coauthored 15 peer-reviewed articles and has presented his work at national and international scientific meetings.

We appreciate your financial support. Your gift is important to us and helps support critical opportunities for students and faculty alike, including lectures, travel support, and any number of educational events that augment the classroom experience. Click here to learn more about giving.

Every dollar given has a direct impact upon our students and faculty.